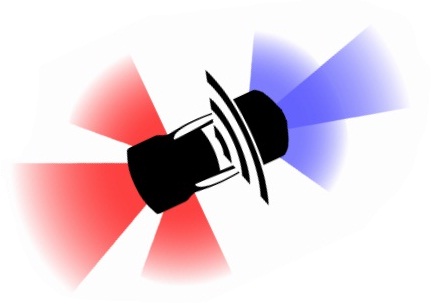 Laser based forward lighting is seen as the next technological revolution in automotive lighting [1]. Laser diodes emitting more than 1 W of blue light combined with dedicated phosphors enable white light sources with several hundreds of lumen. First implementations will make use of the extremely high luminance of nearly point-like sources. Ideas for future applications include high dynamic beam pattern making use of the ability to control the laser light with high accuracy. Both cases have their specific challenges not only for the laser diodes themselves, but also for the phosphors used to generate white light.

While the phosphor of an automotive white LED is typically applied directly on the LED surface, the blue light of the laser diode is radiated towards a remotely placed phosphor target. This phosphor has to fulfill several key tasks at conditions that differ significantly from those in phosphor-converted LEDs:

• Mix the blue and yellow light homogeneously in space and direction

We will elaborate in this paper how these conflicting requirements can be addressed by choosing the optimum phosphor base material, doping concentration, morphology and dimension. We will analyze, how these parameters affect the conversion efficiency, light mixing, contrast transfer function and thermal design. We will indicate how different application constraints, e.g. maximizing luminance versus maximizing contrast, may require different phosphor solutions.

Conference proceedings and magazines are sent by post contrary to the PDF files, which can be downloaded as soon as the payment is completed.
They can't be ordered in the same shopping cart.